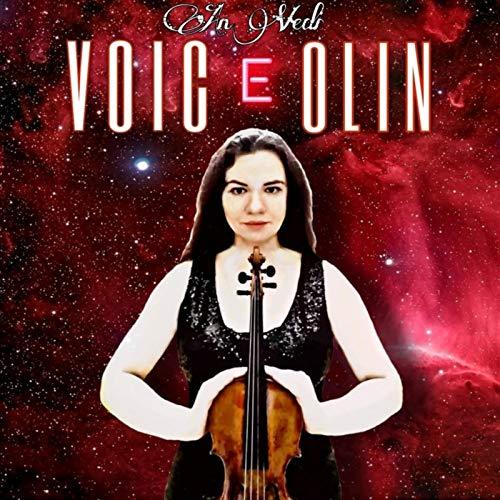 The new album by An Vedi «Voiceolin»

The words “voice“ and “violin“ are combined in the title of this album. «Voiceolin» contains 10 works for a duo of voice and violin and for solo violin. Various styles and genres, such as contemporary classical music, soft rock, country, new age, singer-songwriter, are combined on this album. «Voiceolin» is like a small theatrical performance, the plot of which is based on war stories, as well as philosophical thoughts about the meaning of human existence.There is also a “love story“ of two people who go through different twists and turns.

The idea's concept of ​ «Voiceolin» came up two years ago under the impression of the cycle «Along the Field» by Ralph Vaughan Williams (1872-1958). In this sense, «Voiceolin» is a tribute to the memory of an outstanding English composer, but also a “look into the future“ of music based on current contemporary trends.

An Vedi performs both vocals and violin on this album.

An Vedi wins 3 Gold, 1 Silver and multiple selected at 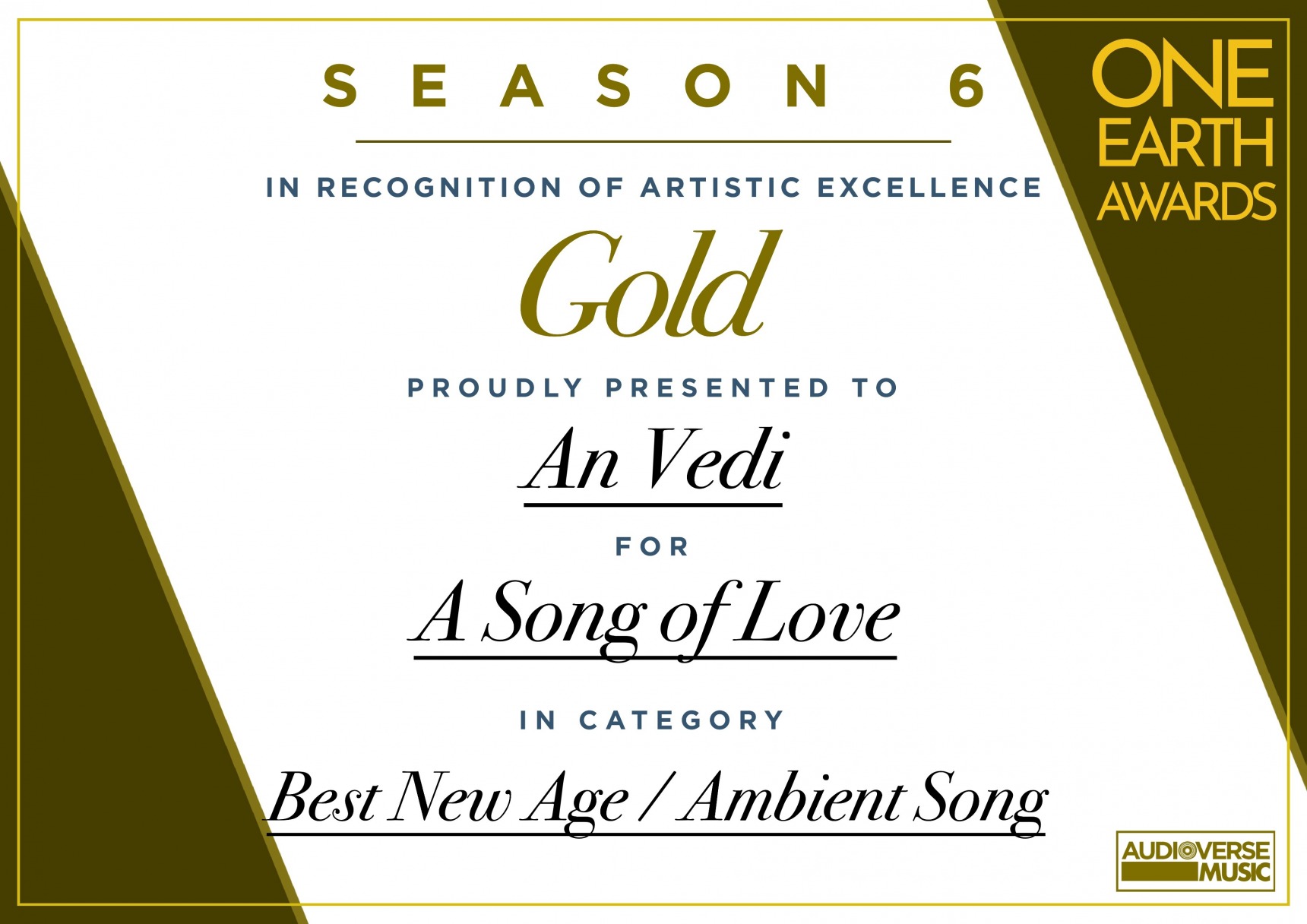 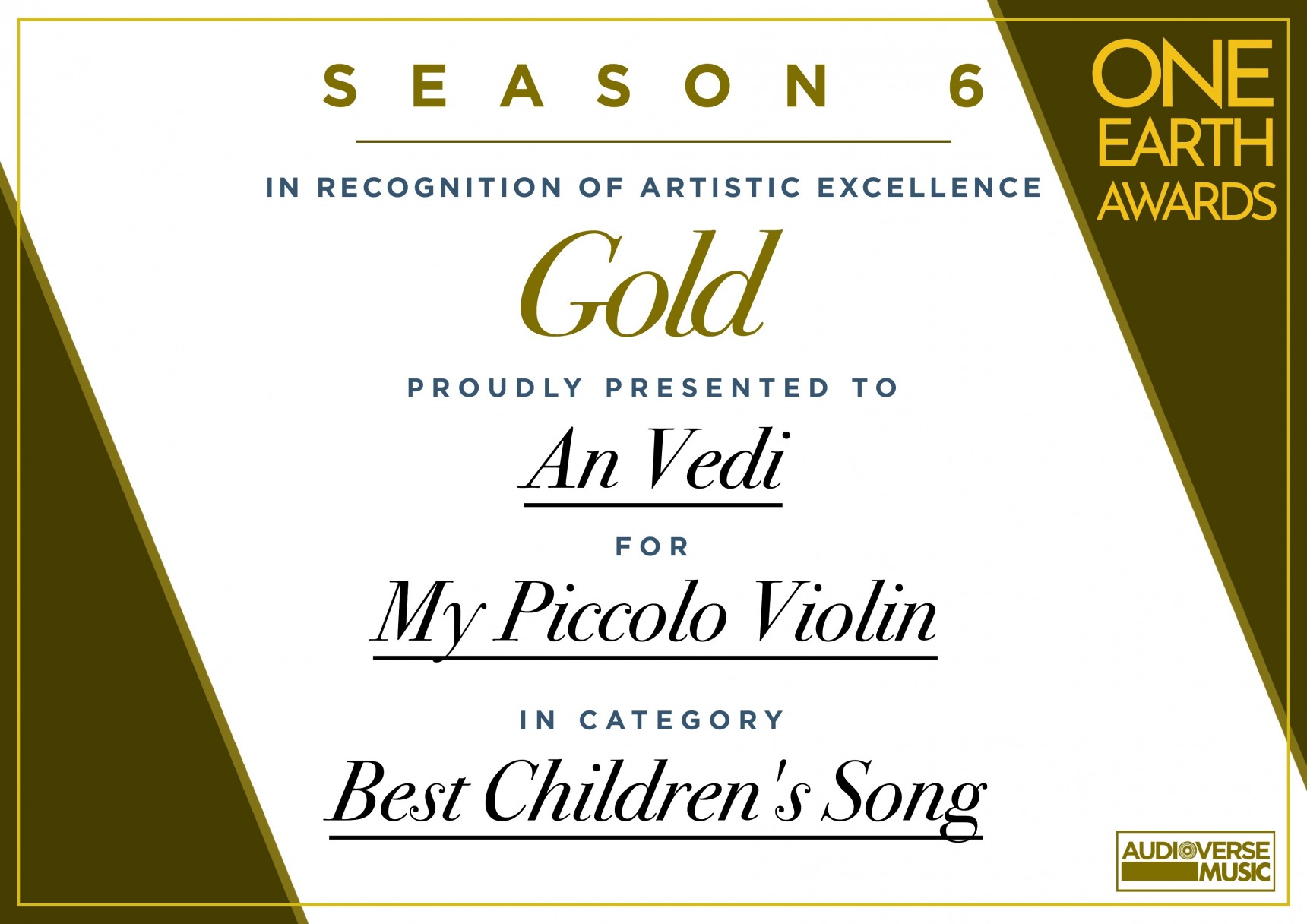 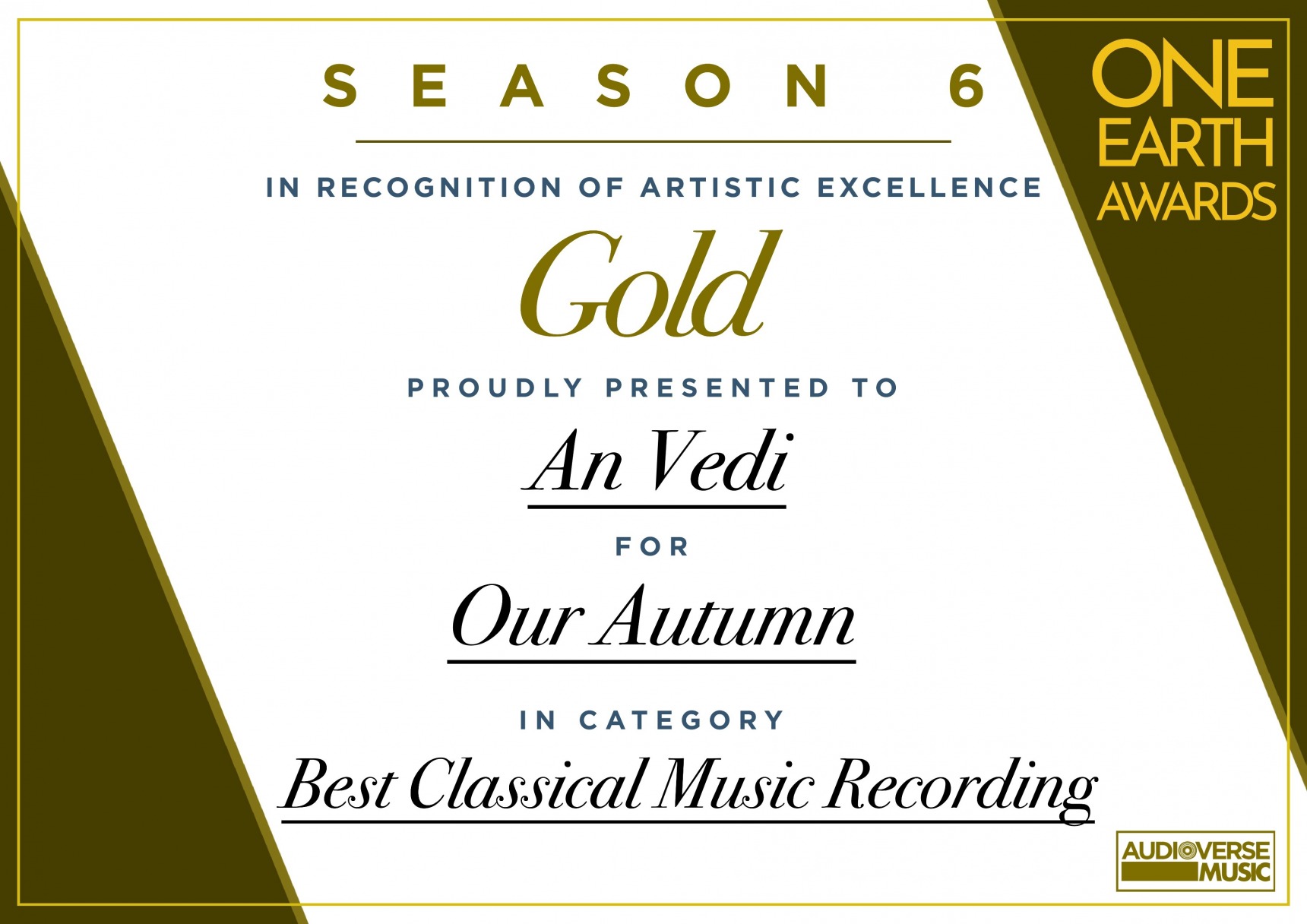 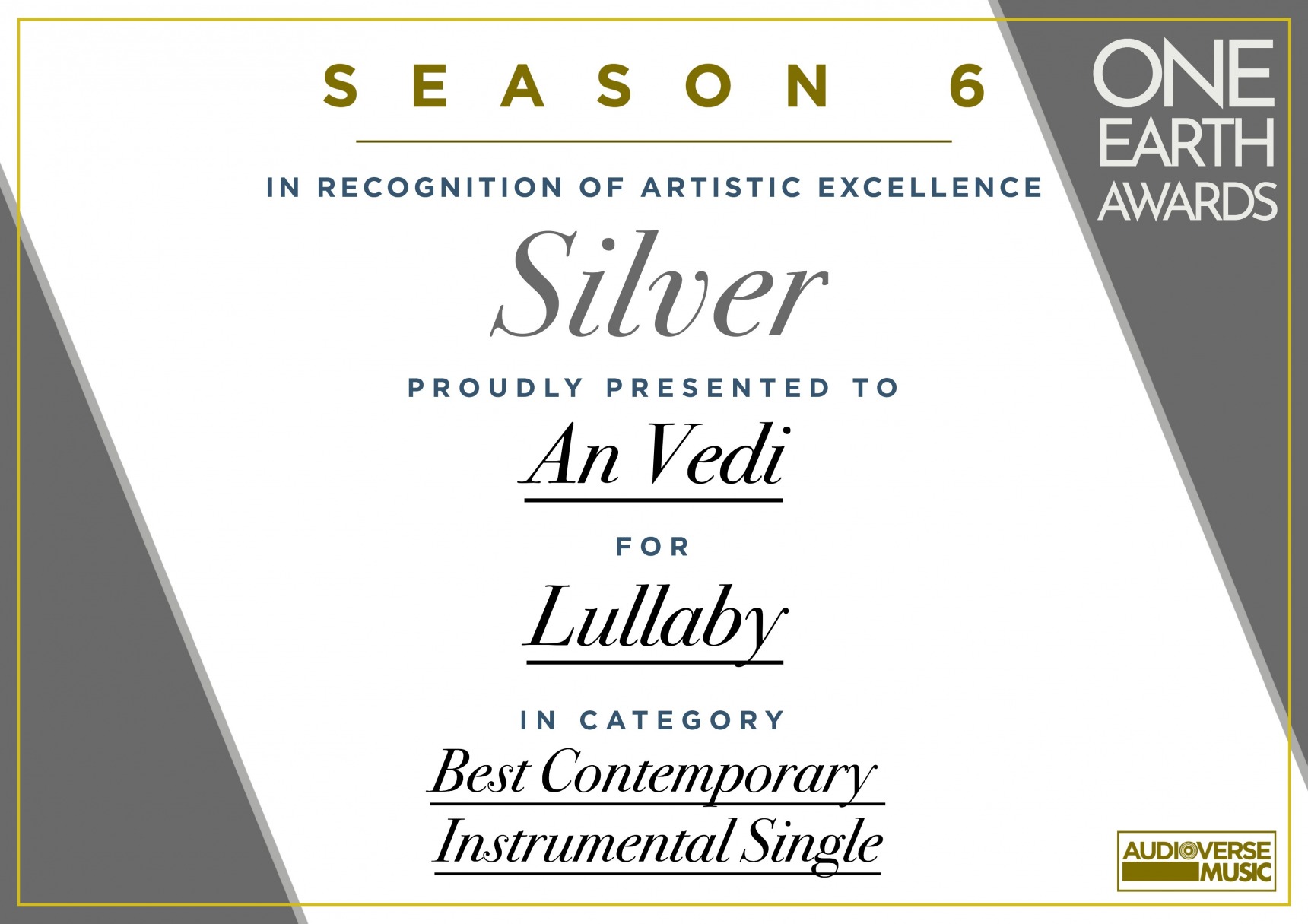 An Vedi receives 9 Nominations at

An Vedi is the Finalist at the World Songwriting Awards (2021) 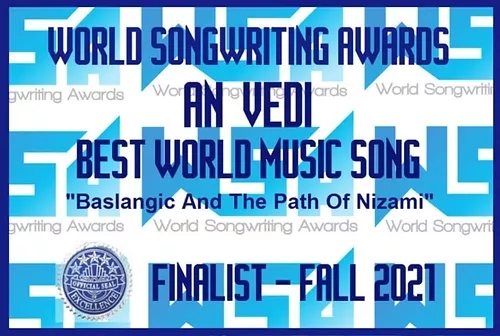 An Vedi releases a new album on September 6th, 2021 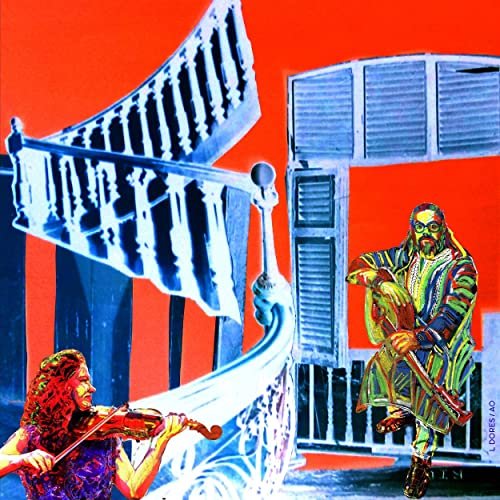 The album "Amaxama Instrumental" is a contemporary music album that contains 11 instrumental songs. It is an excellent collaboration of Antonio Vergara with An Vedi. Where global artists from different countries also played, such as: India with the son of the belabaharr Naviin Gandharv, Argentina with the invaluable participation of Jorge Durietz, member of the emblematic duo Pedro y Pablo, Cuba with the Afro jazz folk touch of the Arango brothers considered the new worldwide jazz trend from the hand of its musical leader the legendary Feliciano Arango, king of timba. And from Mexico with his classical piano the maestro Álex Naranjo graduated from the National School of Art in Cuba in two specialties: classical music and Jazz. Russia joined in with the violinist An Vedi who made a sublime contribution to this instrumental version where she interprets these works with the excellence and quality they deserve, making the record work a totally unpublished and above all genuine creation. So An Vedi's main violin line added interesting new nuances to the album, where in some tracks the violin sounds in a jazz style and sometimes the sound resembles avant-garde music. As an instrumentalist, An Vedi brings some interesting playing techniques. In the songs "Absence Knives" and "In The Attic", she makes an unusual violin melody (the G string is lowered), and the violin sounds like a viola or cello, or like a male voice. This reinterpretation of the melody of each song makes "Amaxama Instrumental" a unique work that attracts listeners as much as "Amaxama".

An Vedi's new classical song about the childhood of

Rising Star of the Year 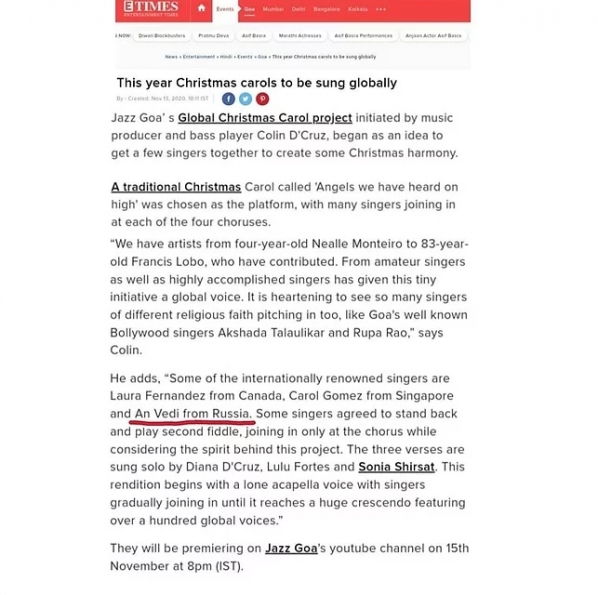 MAINLY PIANO about "The Untuned Piano" 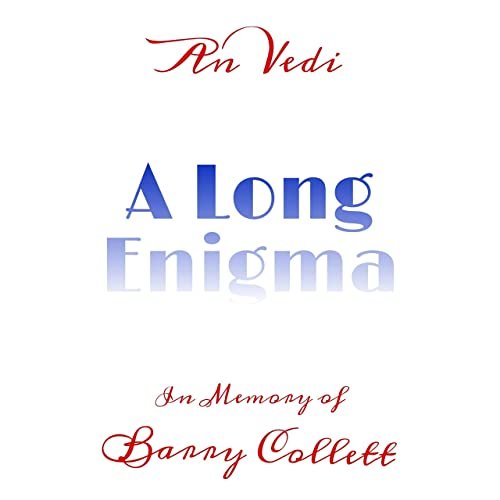 A Long Enigma - the song in memory of Barry Collett

“A Long Enigma“ is an instrumental-vocal composition composed and performed in memory of the great pianist and musicologist, who was a true Elgarian, Barry Collett. This composition consists of some fragment of both original music and changed fragments of Edward Elgar's music from works for violin and piano: Sonata, Romance, Salut d'Amour and Sospiri. These fragments repitched to one main song key. But only violin plays it, because of “piano“ left this world. The lyrics mention a very popular work by Elgar – “Enigma Variations“, like Enigma is all the life with its misterious ways of knowledging the art of music. There are also words of a big thanks of the joy to perform wonderful music by Elgar, and the chorus is like an anthem that is sung from the heart of everyone who has ever been familiar with Barry Collett.

This song is officially released on October 21st, 2020 on all digital platforms as well as it will be available on a CD. All benefits from selling or streaming of this work will be transferred to the Elgar Society to continue promoting of Elgar's music worldwide, the work that Barry Collett has devoted to for many years. 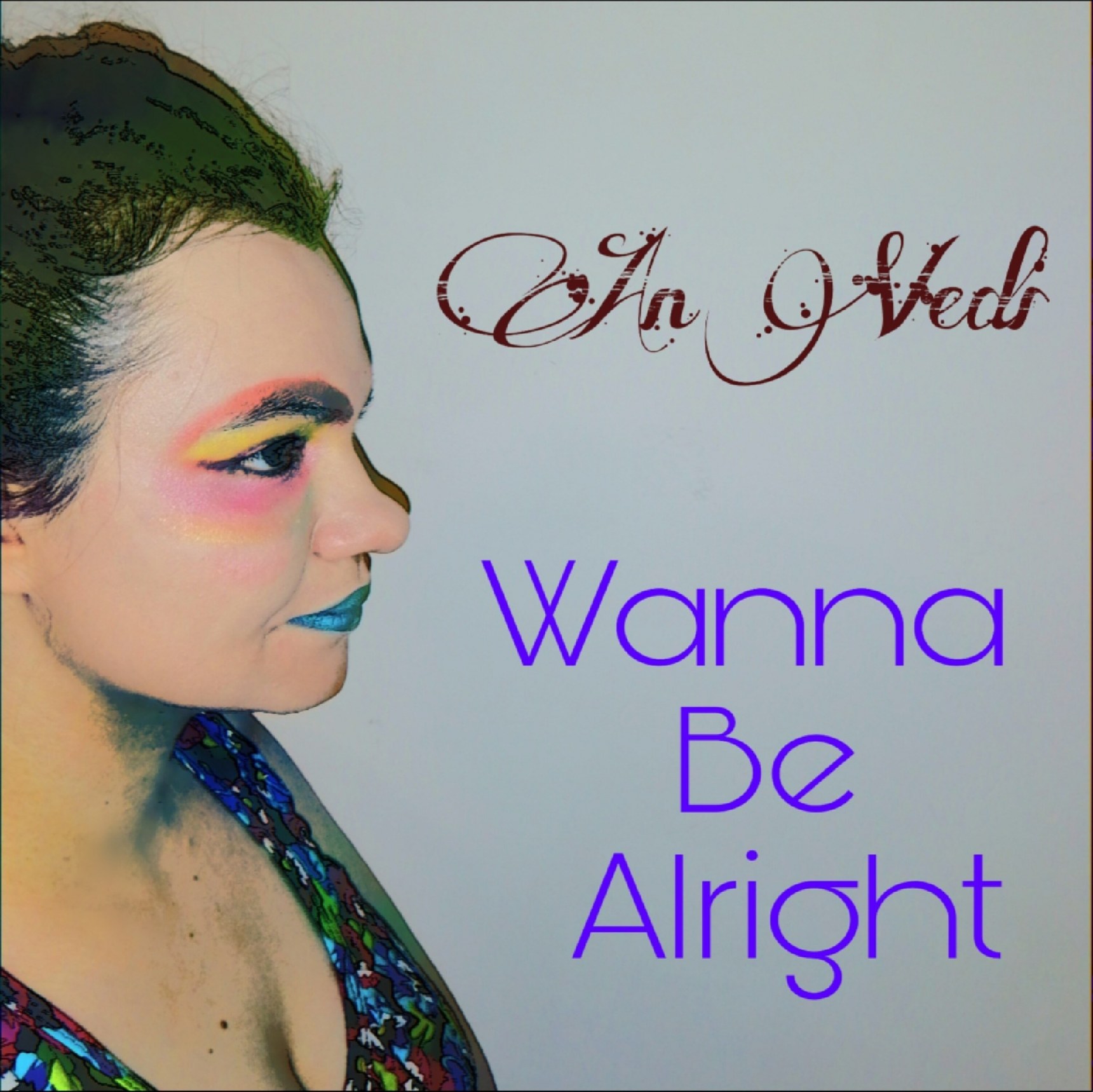 The new EP album "Wanna Be Alright" by An Vedi

“Wanna Be Alright“ is the first EP album by An Vedi, which presents 5 songs for simple vocals (lead) and piano. That's like a “afterwords“ to her previous LP album called “The Untuned Piano“. And this is the final of the hero's story. Almost all the songs on this EP composed during quarantine and self-isolqtion time. “A Song of Love“ is already released in two languages on YouTube as a message of positive thinking.
The whole style of the EP is pop-rock, but there are a lot of motifs which address the listeners to a music for movie, musical and opera.
The release date of the EP “Wanna Be Alright“ is August 4th, 2020. 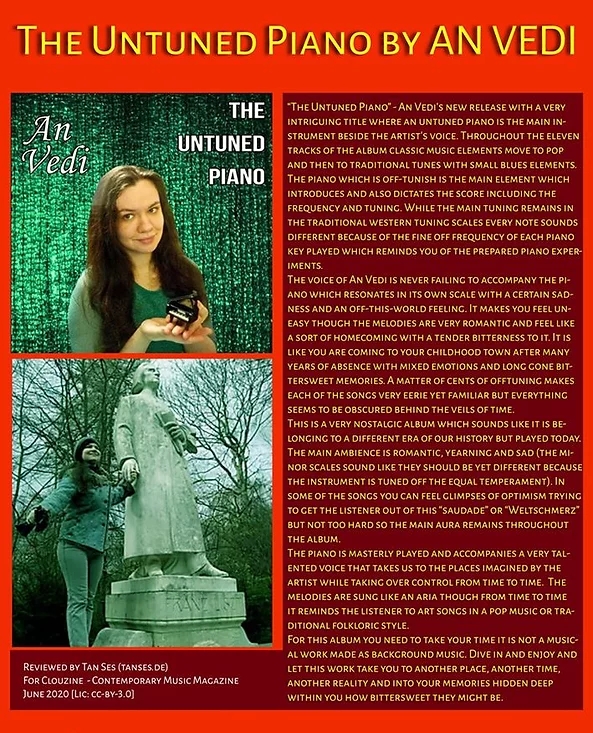 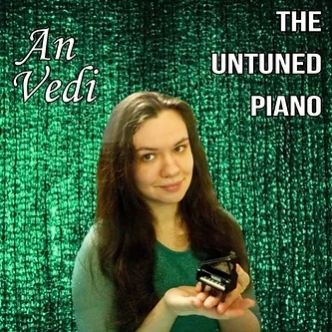 "The Untuned Piano" by An Vedi

Dear music lovers! We are happy to announce the upcoming release of the new album by An Vedi called ”The Untuned Piano”.
This is the first album after An Vedi was awarded The Elgar Medal, became a Member of the International Singer-Songwriters Association, and received the Akademia Music Awards (February 2020). The new album was created in the favorite style of An Vedi - a combination of different musical genres from classical to pop music. The main theme of lyric texts is the search for true love, but not only about that. One of the album’s songs, “We've Never Cried For Us,” is dedicated to musicians and composers, who recently passed away. You can hear “sobs“, “groans“, the “false” intonation in this song - all these details express sorrow and sadness. This is a kind of La Crimosa of 21's century.
“Love and life as a sacrament” is the main philosophical idea of the lyrics, which organically combines with the way of musical expression. This is, indeed, a “untuned” piano, each note of which has more harmonics than a purely tuned musical instrument. (An Vedi had previously composed music for various instruments that were tuned in a non-classical way.) This piano has more expressive and deep sound, which, combined with An Vedi's opera-pop-rock vocals, gives a vivid impression. Almost all the songs on the album ”The Untuned Piano” were recorded live without special sound editing. In this way, An Vedi approaches the classical composition. But lyrics and a special type of vocal performance make this album 100% modern and relevant.
The album is available from March 30, 2020 on all music platforms, as well as as the CD. 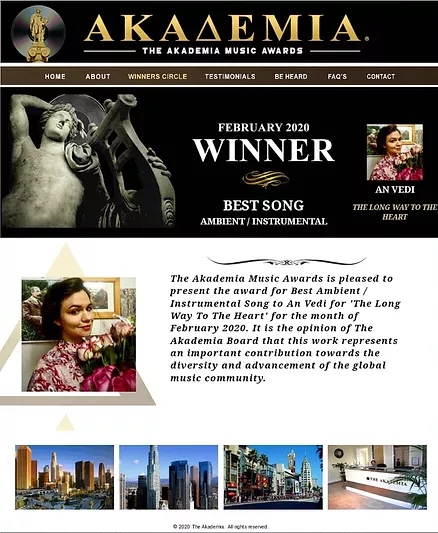 The Akademia Music Awards (February 2020) for

”The Long Way to the Heart” by An Vedi 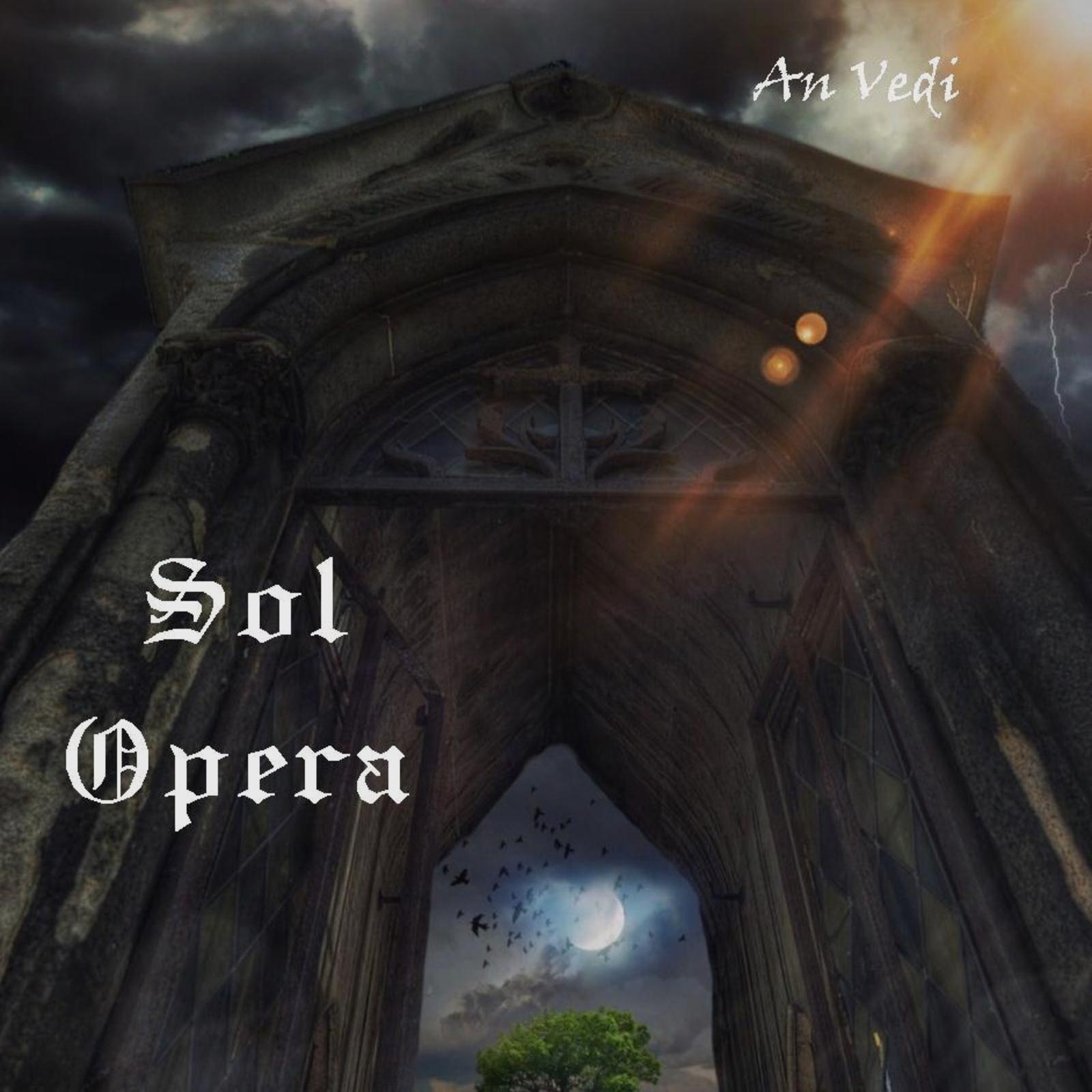 The new album of composer and multi-instrumentalist An Vedi with the unusual title «SolOpera» (LP) will be released on March 20. This album features vocal-instrumental compositions and songs which were written in 2017-2018.
The central place in the album is the 7,5 minute composition in the form of a mini-opera, a monologue, written according to all the laws of the «big» opera dramaturgy.

Despite the apparent similarity with the academic style, in this composition, as in the whole album, a wide genre spectrum is applied: elements of jazz, folk music, hymns, pop-rock, avant-garde.

In this album you may find ten songs and compositions that are arranged into the clear associative chain of «events».

«Abandoned Home» is the first composition on the album – an adult man's memories of his carefree childhood.

The next song is «Lullaby (Instead of Love)» - a permanent attempt to return to the past, because the present is at odds with dreams. «You'll Never Look Like Me» is the continuation of the real world perception,

an attempt to understand who am «I», who are «you», and who are the «others». The song «Outside

the World» is a hymn to the unconscious, a walk in the clouds, everything that has nothing to do with reality. «Train to Jerusalem» - this song is about the spiritual impulse, which will happen to all of us in a good time. The song «My Time» is an appeal to the friend of the main character but they are separated due to circumstances. The big violin solo opens the composition «Welcome to Destroyed World», it expresses the disunion of the world and people, without words; the lyrics in the vocal part of the composition again return us to the searching for the meaning of being, searching for the perfect «object» or leader that can help people to become spiritually sighted. «The Choice» is the song about that good and evil coexist in this world,

but everyone must make their choice. «SolOpera», as already mentioned, is a monologue vocal instrumental composition. It consists of several parts («micro-acts»), which are interconnected by means of dramaturgy. The protagonist travels through the «sea of life» on the dream ship, seeks an earthly ideal of spiritual beauty, and, in the end, he chooses «suffering instead of love». The closing song of the album – «Believing in the Truth» – combines a lyrical plea for deliverance of having ones head in the clouds and a hymn to the truth, which does exist in our world and is not just a lie.

The new album by An Vedi «SolOpera» is an exquisite genre blending, therefore, a wide audience of listeners can perceive philosophical ideas about the truth, spiritual search, and the formation of personality throughout life.

The first edition of the composition «Abandoned Home» was recorded as the promo video for this album.

The album «SolOpera» will be available on the release day (March 20) as a digital album,

An Vedi is the Filalist at the 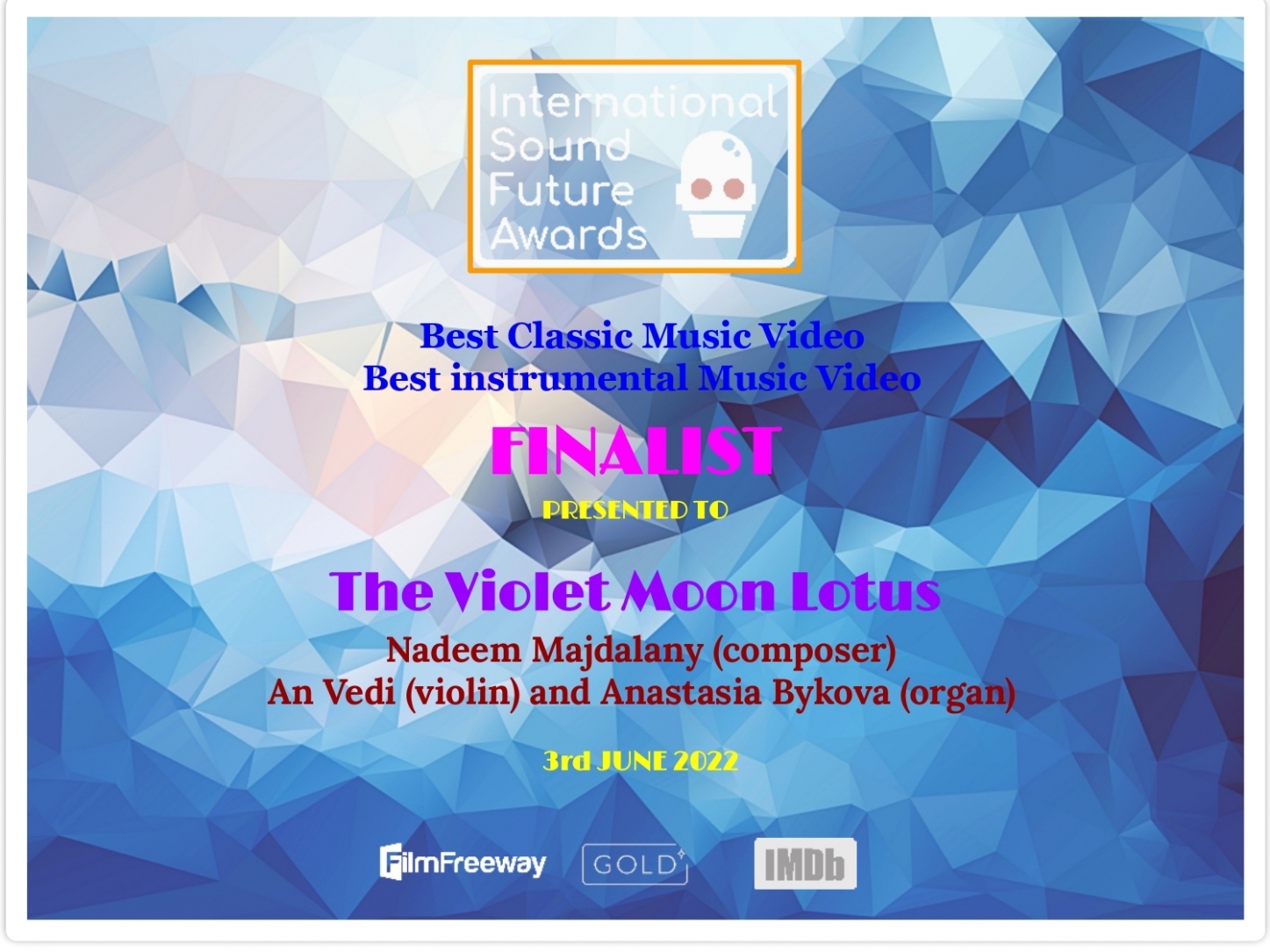 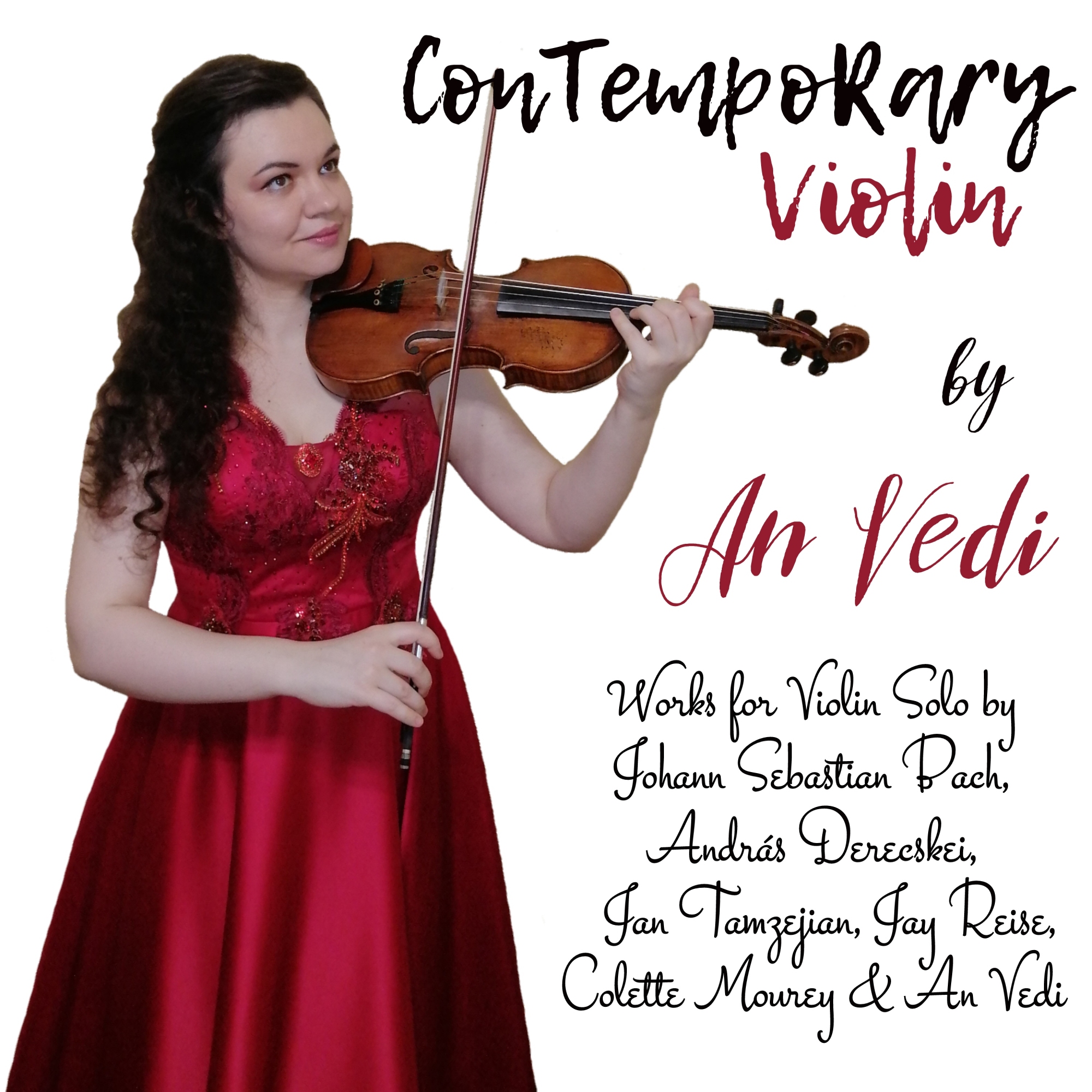 The album "ConTempoRary Violin" by multi award-winning artist An Vedi has been released on August 12, 2022. This album contains only works for violin solo by Johann Sebastian Bach and 5 living composers from different countries. The unusual title of the album “ConTempoRary Violin" tells us about the connection between the past and the present.

“...After the success of my previous album "Voiceolin", 2021 (it has more than 10 awards and nominations), in which "Sonata A War Zone" played a big role, I realized that it's time to give listeners new music for solo violin. It's always difficult to listen to an unaccompanied violin, much more difficult than music for piano or guitar. After all, the violin has a high range and not everyone can withstand so much music in these sound frequencies. But my love for this instrument is boundless, so I took on this difficult mission - to bring this music to people. I thought a lot about whether to make this album only classical or only modern. And I came to the conclusion that classical and contemporary music can blend perfectly here." - An Vedi says.

All modern works were composed from 2000 to 2022 and An Vedi releases this music for the first time.

"The Music of Our Victory" as a Filmmaker and Performer, category "Best Classic Music Video"

An Vedi wins the International

as the Female Musician of the Year

with the music from her album "ConTempoRary Violin"

The music video "Heyran" has been officially selected

at the 37th Druk International Film Festival and

An Vedi is nominated for the Golden Dragon Awards® 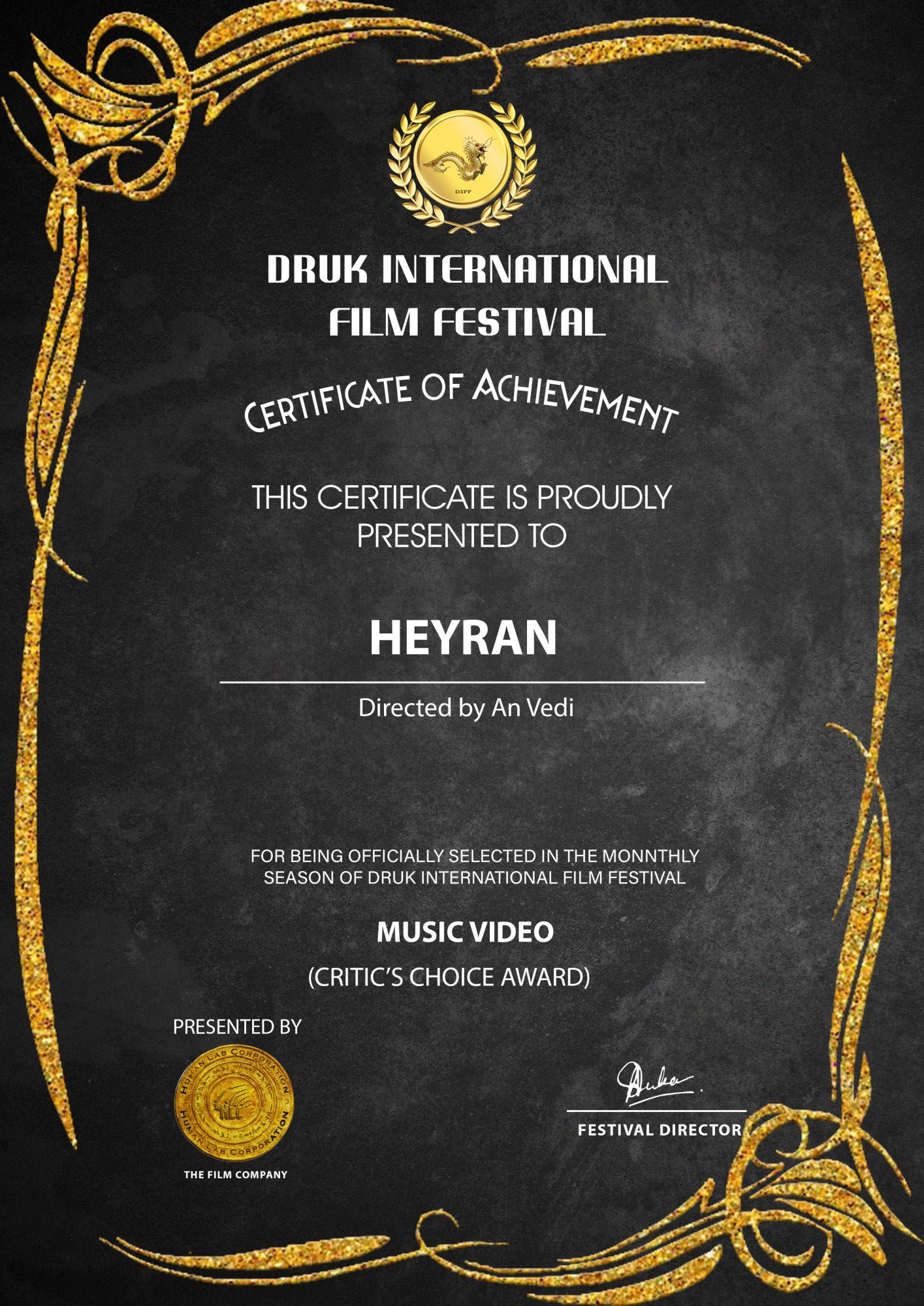 An Vedi joins the team of judges

at the World Online Music

has been officially selected 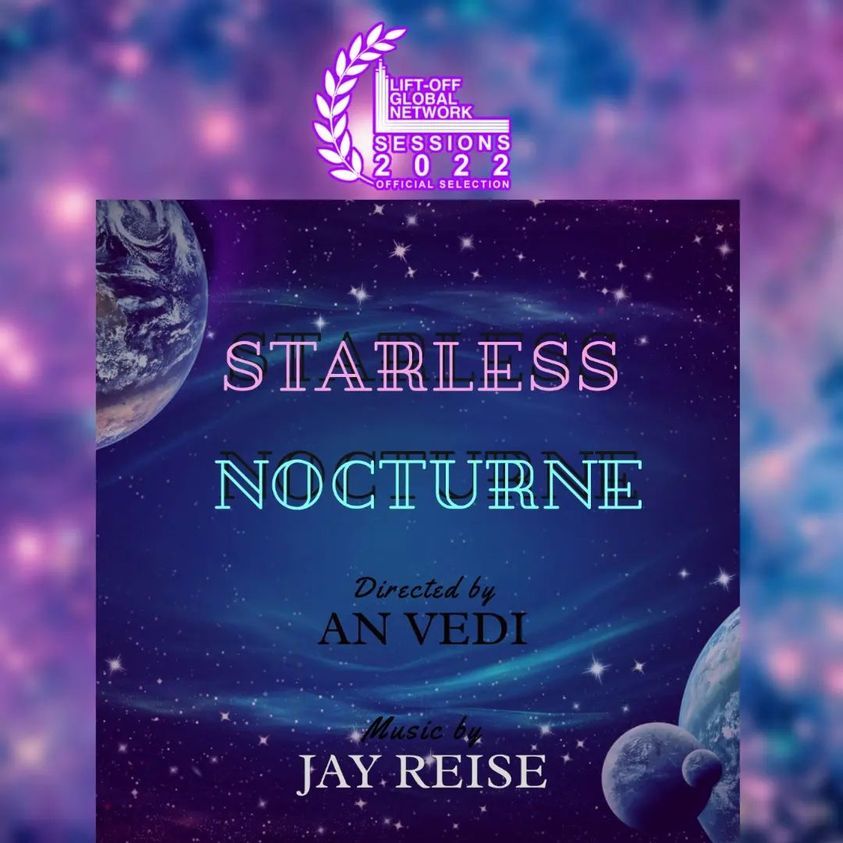 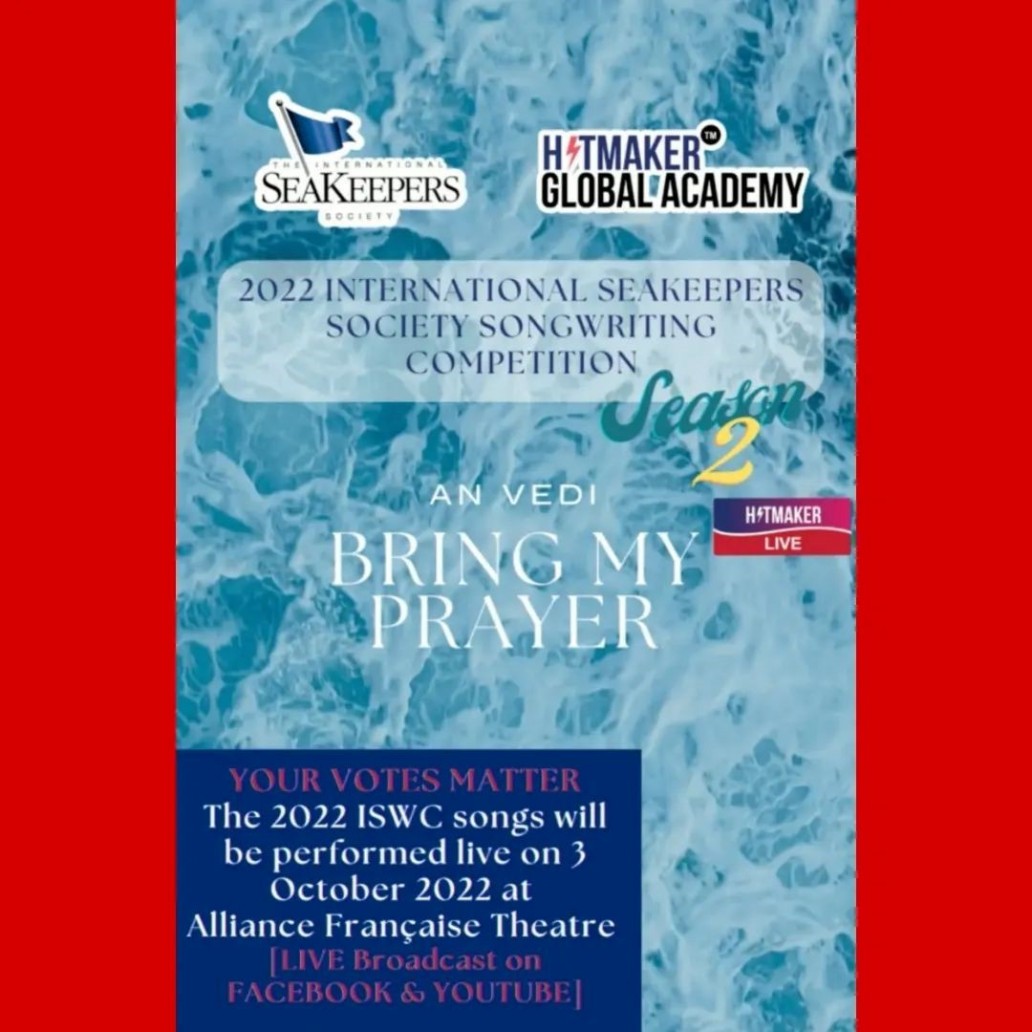 An Vedi is the "Impact Award" Nominee

An Vedi wins the Clouzine 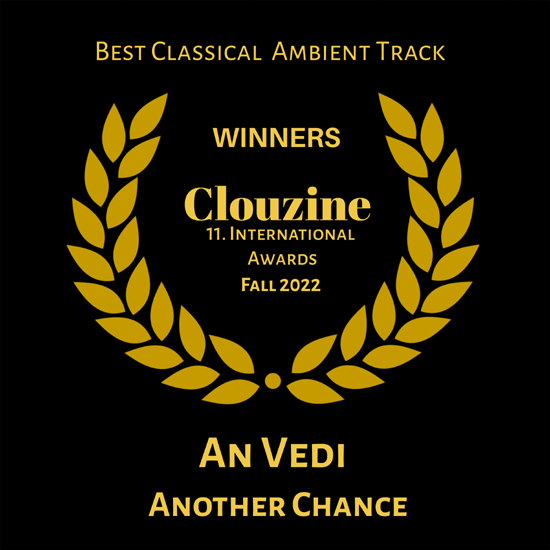 An Vedi joins the team of judges at the 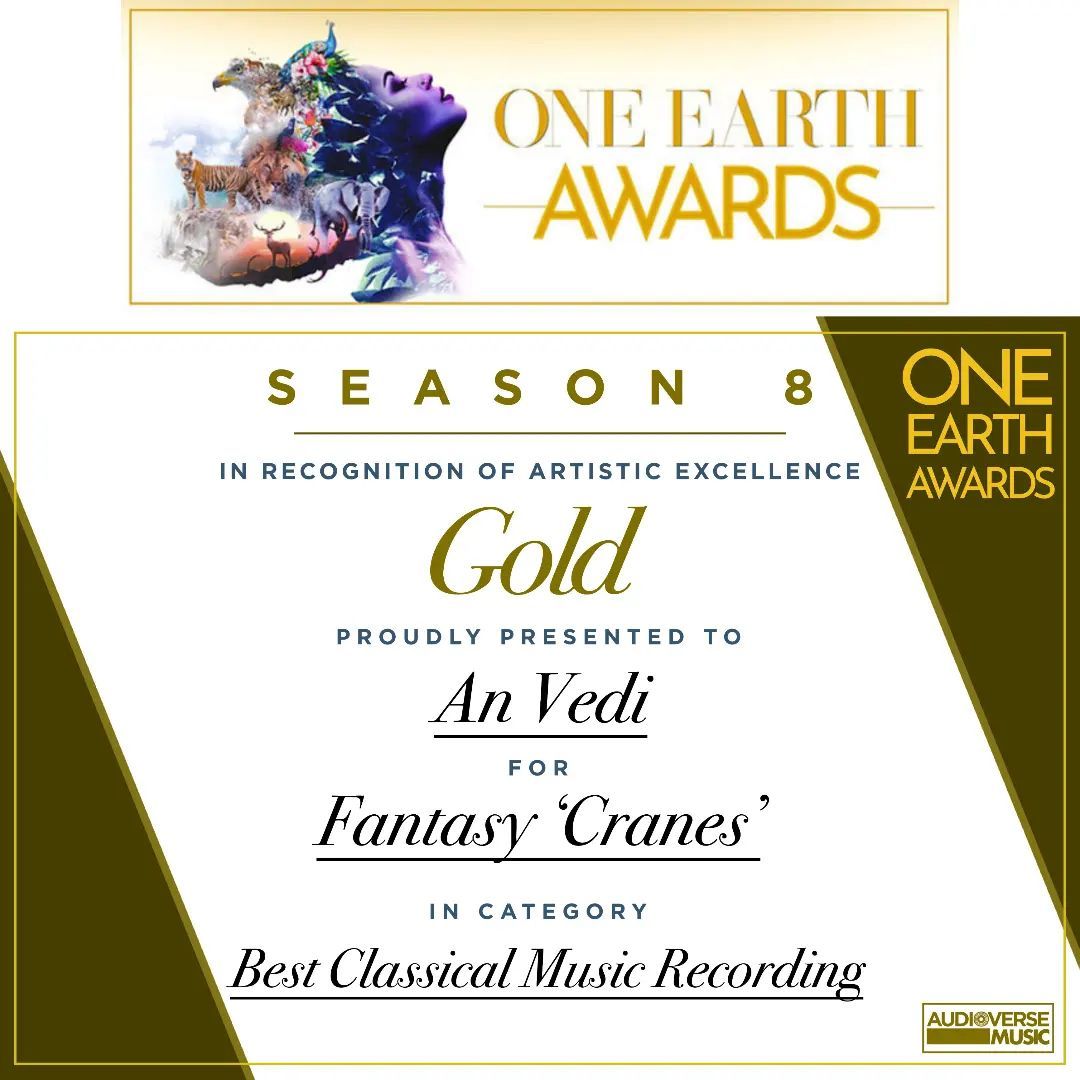 An Vedi joins the team of judges at the

The article about "My Sweet Lord"

at the Write Away Magazine 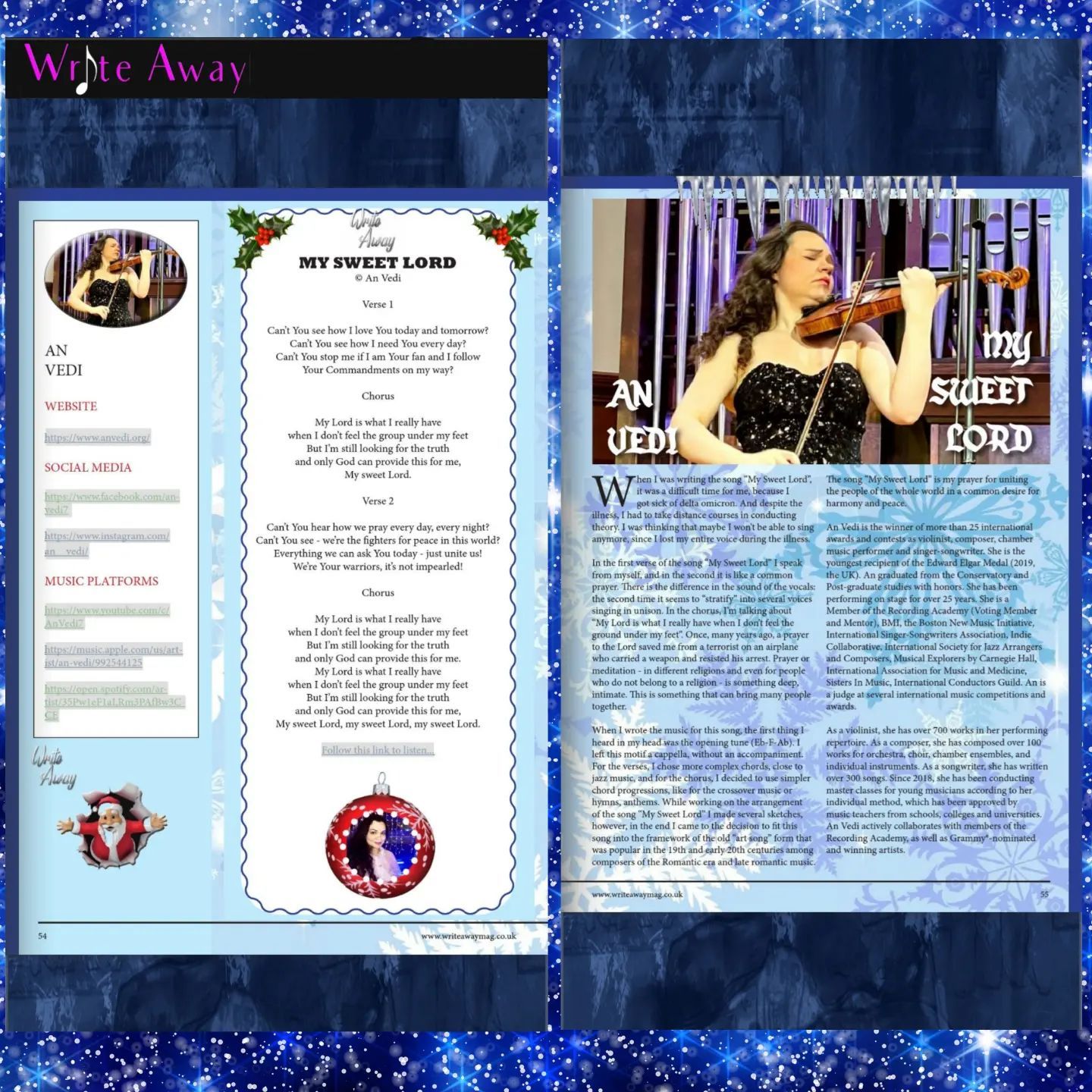 An Vedi took part in the recording

of the album "Brindavan" by Devan Ekambaram,

which received Silver Medal at the Global Music Awards 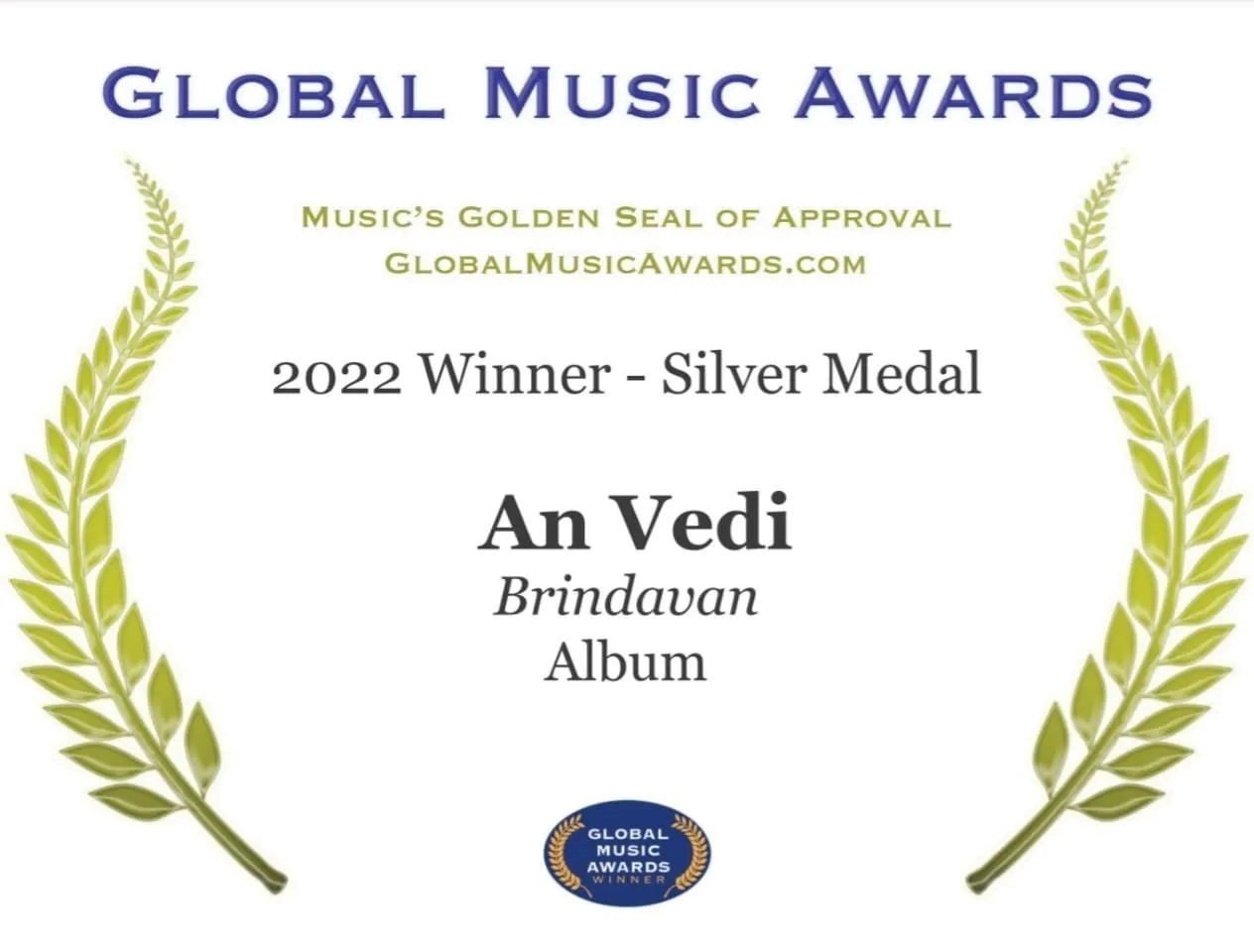 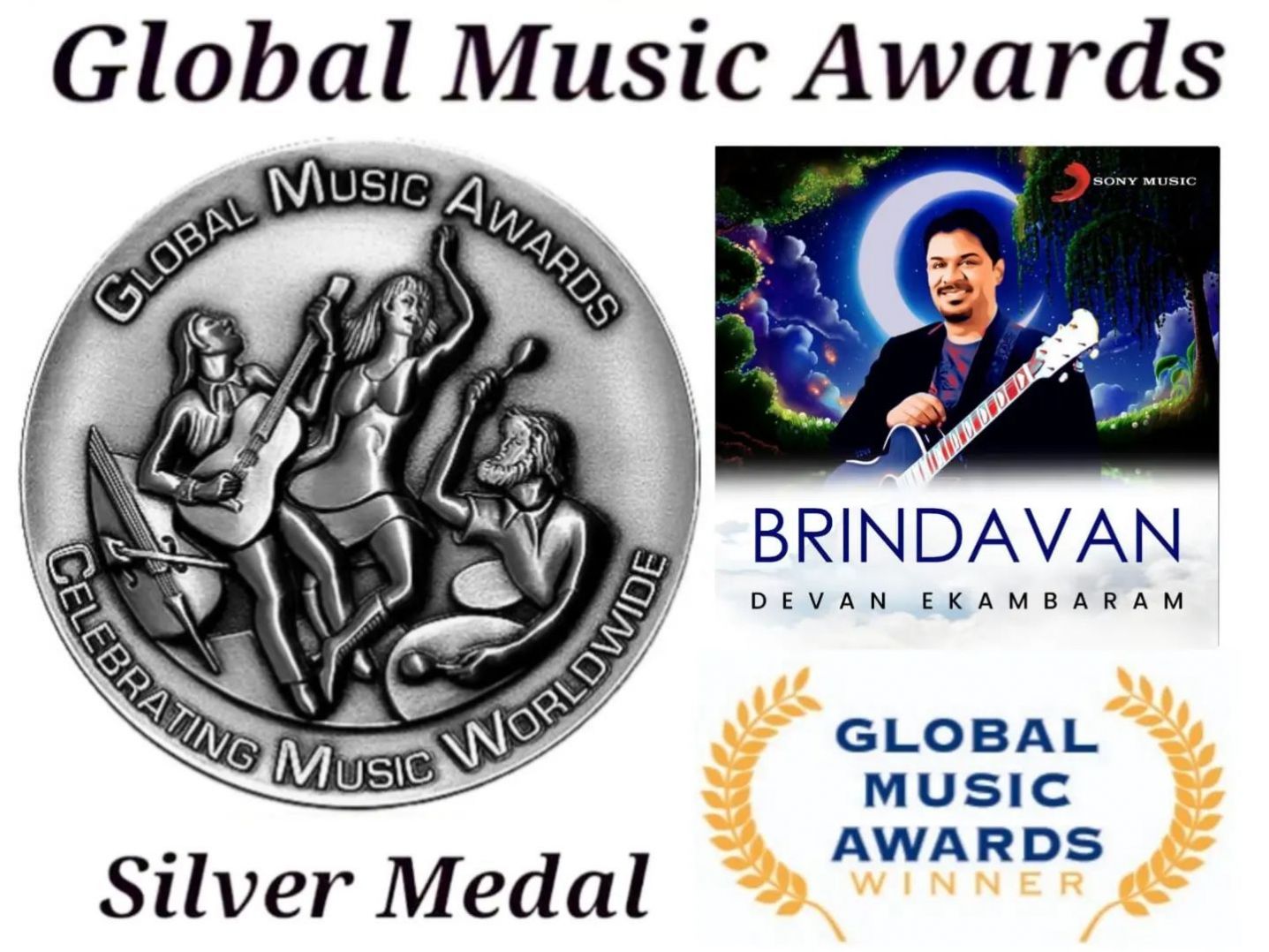 An Vedi has won her first contests

The International Competition for Conductors "Symphony"

The International Competition "Conductor of the Year"

at the Museboat Live Channel